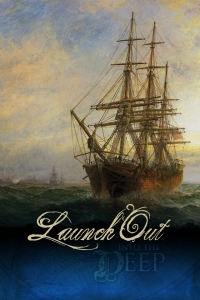 Now when he had left speaking, he said unto Simon, Launch out into the deep, and let down your nets for a draught.  And Simon answering said unto him, Master, we have toiled all night, and have taken nothing: nevertheless at thy word I will let down the net. Luke 5:4-5

“Launch out into the deep…”  I’m sure many a sermon has been preached on those five words in chapter five, and deservedly so.  Those five words address a faith many are inspired by but few experience.  Launching out so far that God is the only possible rescue and the only possible explanation for success.  Reading from our desks or easy chairs gives us a false sense of detachment when we think about faith of this magnitude.  The mere thought of that kind of blind obedience brings with it exhilaration, excitement, fear, anticipation, anxiety, doubt and of course rational thought.  That’s why it is the kind of faith that only 300 men in Gideon’s 32,000 man army possessed.

“Nevertheless at thy word…”  Simon Peter along with James and John had just cleaned their nets.  Being up all night they surely had not sat in one place.  They had moved back and forth across the water, looking for any sign of fish.  They were tired and ready to go home.  Maybe tomorrow would be better.  (It certainly couldn’t get worse.)  There was no earthly reason to go back out and drop those nets again.

But something caused Simon Peter to do it.  Maybe it was the literal thought that it couldn’t get any worse.  Maybe it was to demonstrate that he knew what he was talking about.  Maybe it was just to appease this man and get him off the boat.  Whatever the reason, I doubt it had much to do with strong, unwavering faith.  That came later. Notice that Jesus told him to let down his nets; plural, and Simon agreed to let down the net; singular.

No, the faith and belief that sustained Simon the rest of his life began with obedience.

God is God.  He will test our faith, reward our faith, and grow our faith to a degree we can’t imagine.  Want He wants from us is not huge, undying faith – that will come.  The Almighty God of the Universe, our Lord and Creator wanted one thing from the Israelites and He wants one thing from you and me – obedience.  What minuscule amount of faith it takes to obey is sufficient.

Think of all the rational objections you can.  Reason how what you feel led to do makes no sense and you don’t even believe half this stuff.  Tell yourself how crazy this will look to everyone around you.  And then remember the four words of obedience that changed Peter’s life and eternity – Nevertheless at thy word.

One existence that cannot be denied, a new sign has just been erected near the Kentucky State Fair and Expo Center and it has the city buzzing. Lifted high above the roadways near the Louisville airport a giant billboard reads: “Don’t believe in God? You are not alone.”

An advertisement for the Louisville Coalition of Reason, the billboard is said not to be an offense to anyone but actually proclaim a positive message. The coordinator of the organization has said they “want to reach out to others with like-minded beliefs,” “let others know [they] are here,” and “want to be accepted as an equal part of the community at large.”

Others who oppose the message on the billboard have said they believe the real intent of the message is “an invitation to a dead-end path,” or to “draw people away from God.” But according to one news reporter, the local organization has stated that the purpose of the billboard is to educate. “Our answer is not so much what we turn people away from, but what we turn them to, which is rational thought, and evidence based thinking [and] belief.”

A new kind of atheism is on the rise and America is under the influence. Because we live in a country that is tolerant and respectful of alternative views, it appears that this is only the beginning of what is to come. Already similar models have been appearing all over the nation, from St. Petersburg to Seattle, with messages such as: “Are you good without God? Millions are.”

These bold assertions are a once radical idea that has gradually shifted into a new cultural trend. While there have always been people that are skeptical about the existence of an all powerful God, only more recently has anyone put forth this kind of effort to prove what they believe does not exist.

Atheism, from the Greek word atheos, means “without – deity,” or “without – god,” and has been around long before its name. Some 3,000 years ago the Psalmist wrote, “The fool has said in his heart, ‘there is no God.’” (Psalm 14:1). But disbelief in the existence of something and taking out a personal vendetta to prove that it does not exist are two different things; for one is a lack of faith while the other requires it for consistency.

If no threat exists, why go to such great lengths to prove something instead of just letting it go? After all, preaching against something non-existent is pointless; or is there another reason for all the fuss? The Bible says, “The god of this world has blinded the minds of the unbelieving so that they might not see the light of the gospel of the glory of Christ, who is the image of God” (2 Corinthians 4:4).

Billboards and bus signs are nothing more than smoke and mirrors set in place to distract people from the one true God. If the world could be rid of religious belief and practice, it still would not change the position of God as Creator of the universe and Redeemer of mankind. Which is why the Bible says, “For what can be known about God is plain (to them), because God has shown it (to them). For his invisible attributes…have been clearly seen” (Romans 1:19-20).

A message about the disbelief in God is a good trick to pull on unsuspecting people but the illusion will not last long. God won’t simply disappear because people stop believing and He cannot be disproved; however, He must be accepted by faith. The Bible says, “Without faith it is impossible to please God, because anyone who comes to Him must believe that He exists and that He rewards those who earnestly seek Him” (Hebrews 11:6).

Did you know that more people believe in heaven than hell? Even if they do not believe in the actual existence of the place, almost everyone has their own concept. Some people believe it’s where all the “cool people” go, and that only fuddy-duddies go to heaven. They laugh and joke about the wild parties that take place, and that the “real” party won’t start until once they arrive. Others believe we are living in hell now and that our only escape is by death into heaven. Still others believe that hell is just an exaggerated expression that people use to curse with but that it is not an actual place.

My earliest concept of hell probably came from the things I saw and read. Similar to the perception many people have, comic book and cartoon artists have also described it as dark, cave-like and fiery place where bad people go or spirits reside. Could it be that similar representations of hell have desensitized the general public so much that it no longer has the same impact on the modern world? The Bible describes hell as being much more terrible. You will find it described as a place of “disgrace and everlasting contempt” (Daniel 12:2), where there will be only “torment and agony” (Luke 16:23-24), an “eternal fire” (Matthew 25:41), that “is not quenched” (Mark 9:44), an “eternal destruction” (1 Thessalonians 1:9), and where the unrighteous will be “tormented day and night, forever and ever” (Revelation 20:10). Not so good, right?
Several Christians today have grown so comfortable with hell being an expression that they no longer take it as seriously as the Bible says they should. Many prefer not to talk about hell because of the “negative connotations” it often carries. In an interview with Larry King, the author, motivational speaker and pastor of Lakewood Church in Houston, Joel Osteen, said, “I know there is condemnation, but I don’t feel that’s my place [to talk about it].”
But if Christians don’t talk about hell, what makes the good news of the gospel so good? In fact, during Jesus’ ministry on earth, he spoke about hell as much, if not more than, heaven! (Luke 16:19-31, Matthew 23:33; 25:31-55). The Bible clearly teaches that the punishment of sin and lawlessness is an infinite and eternal death that each person has earned (Romans 3:23; 6:23). It is only after understanding this that the good news is actually “good.”
The good news of the gospel is this: Jesus Christ came to this earth and lived a perfect and sinless life. He shed his blood and died on the cross to to pay for sin by taking God’s wrath upon himself. He was buried in a tomb and on the third day rose again to defeat sin and death once and for all. To be reconciled to God one must trust in the Savior, Jesus Christ, and repent (turn away) from sin. Jesus said, “Repent and believe the gospel” (Mark 1:15).
Christian, why don’t you share this with others? The bad news is only offensive if you don’t follow it up with the good news. Share Christ with love. Because without the good news, the truth of the bad news would be the end for all.

Get Your Free Copy Here!